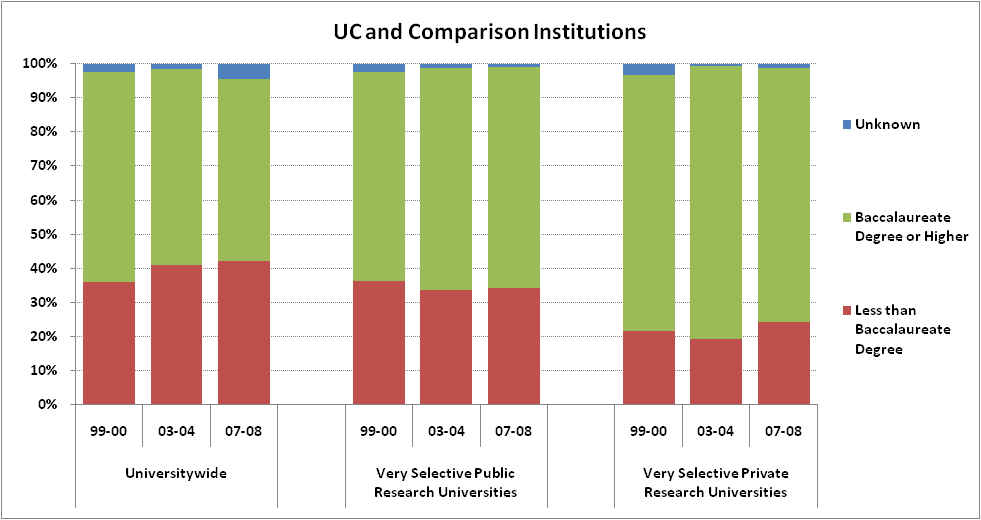 A first-generation student is one for whom neither parent holds a college degree.

Having parents with college degrees often provides students with the role models, family expectations, know-how and financial resources that ease the transition from high school to college and that support students' success in college. Students whose parents have not graduated from college lack this resource and the advantages it can confer.

Reflecting its commitment to providing access to students from many different backgrounds, the University of California enrolls a higher proportion of first-generation students than many of its peer institutions.

Systemwide figures represent the education level of the higher educated parent. The reported education level of each parent came from the NPSAS student interview or, if the student was not interviewed, the Free Application for Federal Student Aid (FAFSA). The two groups of comparison institutions were randomly selected from those categorized as "Research Universities - very high research activity" according to the 2000 basic Carnegie classification. Comparison institutions were further limited to those considered "Very Selective" based on their admissions requirements, admit rate, and the SAT/ACT scores of their admitted students.

Campus figures represent the highest parent education level that the student reported on the UC Application for Undergraduate Admission.