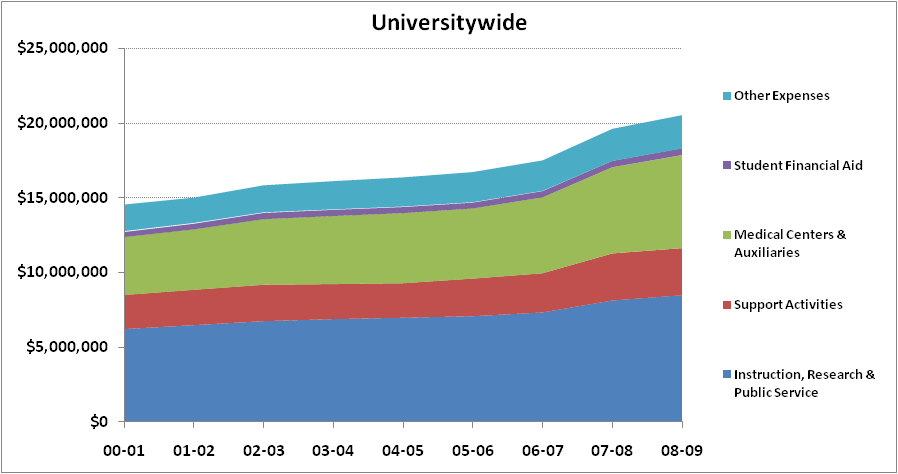 The University's core mission activities - teaching, research and public service - accounted for more than 40 percent of total expenditures during 2008-09.

Medical centers and auxiliary enterprises, such as housing and dining services, accounted for 30 percent of expenditures in 2008-09.

Libraries and other academic support services, such as instructional technology, student services, administration and general campus (but not medical center) operation and maintenance of plant, accounted for 15 percent of total expenditures.

UC students received total grant and scholarship aid of almost $1.2 billion in 2008-09. This includes $458 million paid directly to students, which is the amount shown in the chart above. In addition, UC students received $715 million in grants and scholarships in 2008-09 to help pay their tuition and fees, campus housing, books and other campus charges; these dollars are not included in the chart above because auditing rules do not treat them as direct expenditures.

These expenditures do not include expenses of the Department of Energy laboratories.

Figures are in billions of inflation-adjusted 2008-09 dollars.

Medical centers include UC's hospitals and other patient care activities; auxiliaries include operations such as food service, parking and student housing; other expenses include interest, depreciation and other miscellaneous expenses. Department of Energy laboratories, including the Lawrence Berkeley National Laboratory, are not included in the data above.