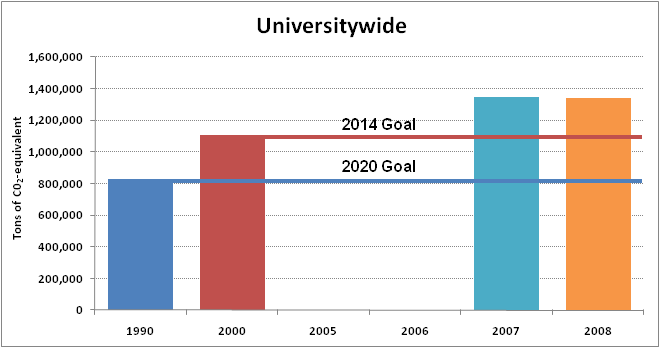 Through its Policy on Sustainable Practices, UC has pledged to reduce its greenhouse gas emissions to year 2000 levels by 2014, and to 1990 levels by 2020.

These goals are consistent with the targets established by the Global Warming Solutions Act, which Gov. Arnold Schwarzenegger signed into law in 2006. In an era of rising utility costs, they also reflect strategies for reducing costs.

UC campuses have developed plans to achieve their targets and currently are implementing emission reduction projects; the University will track progress on an ongoing basis.

Additional information about UC's sustainability-related goals, implementation procedures, and accomplishments can be found in the UC Policy on Sustainable Practices and in the Annual Sustainability Report to the Regents. Both reports are available at http://www.universityofcalifornia.edu/sustainability/reports.html.

These charts show the tons of carbon dioxide-equivalent (CO2e) associated with purchased electricity and natural gas and onsite fuel combustion. This is an initial measurement; future inventories will also include greenhouse gas emissions generated from faculty/staff/student commuting and university-funded air travel.

Year 1990 and 2000 baselines are estimates based on the best available data and calculation methods. Baselines are subject to refinement when better data become available or inventory protocols improve. Data are not available for 2005 and 2006 for all campuses; therefore a Universitywide statistic could not be computed for those years.

Data are estimates of tons of carbon dioxide-equivalent (CO2e) associated with campus utilities and onsite fuel combustion. Future inventories will include additional sources, including greenhouse gas emissions generated from faculty/staff/student commuting and university-funded air travel. Universitywide statistics are available where all campuses have available data. Medical center emissions are included with their associated campus. 2007 systemwide data include imputed levels for UCSF, which is not shown separately.