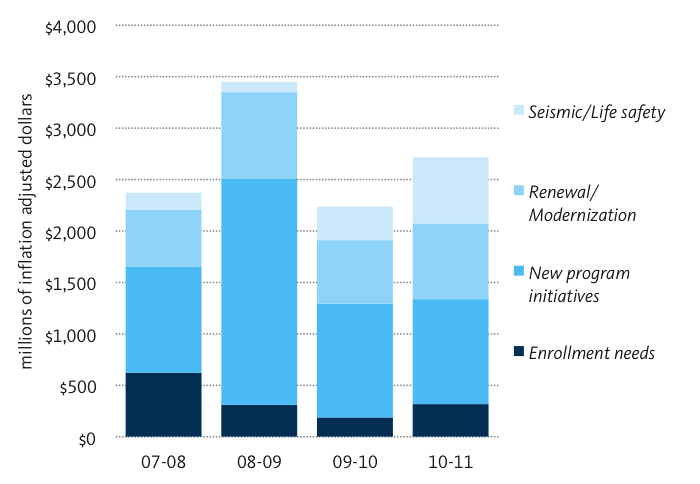 More than half of all capital funds spent between 2007-08 and 2010-11 were for projects addressing core academic needs. Such needs arise from student enrollment growth and from the establishment of new academic and research programs that require new buildings or the renovation of existing ones.

The types of capital projects undertaken in the past four years vary considerably by campus in ways that reflect the campuses' local priorities, opportunities and challenges.

Since 1998-99, the University has spent more than $1 billion on seismic corrections for earthquake mitigation. Of the space rated "poor" and that remains to be corrected as of September 2008, approximately 87 percent is located at Berkeley and UCLA. A study is under way to review campus plans for mitigating seismic risk and completing the remaining work.

As campus facilities age, they must periodically be renewed or upgraded. Heating, ventilation, electrical and plumbing systems, elevators and roofs all need to be replaced multiple times during the lifespan of a building. The University has a substantial backlog of deferred maintenance.

Since 2007-08, the majority of projects at Merced, Santa Cruz and Riverside focused on facilities needs resulting from growth in student numbers.

Berkeley and Santa Barbara spent more than three-quarters of their capital funds on seismic upgrades and facility renewal.

The five campuses with medical centers spent the majority of their capital funds on new program initiatives. 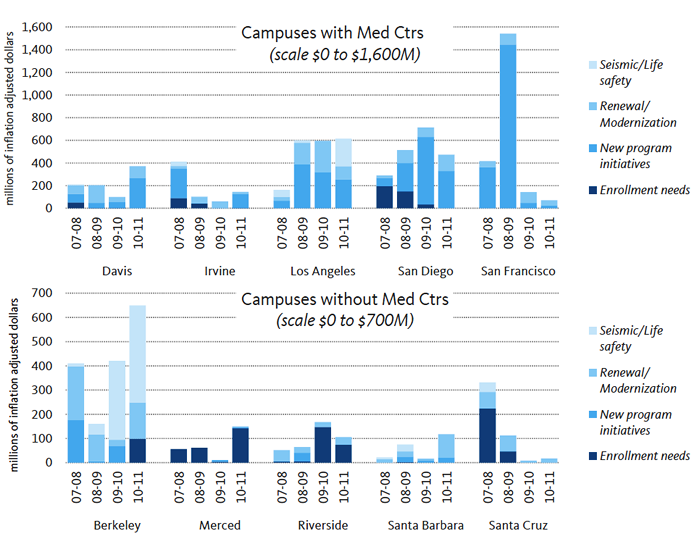