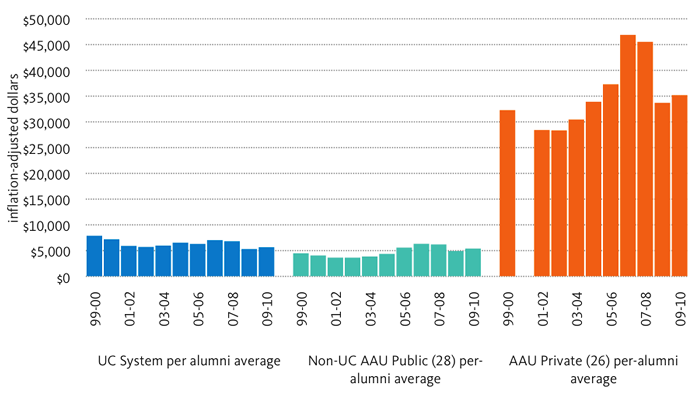 A university's endowment includes money or property that has been donated over the years, usually with the stipulation that the principal be maintained. The interest from endowment funds supports a range of activities, including faculty salaries (e.g. in endowed professorships), student financial aid and research.

UC endowment funds, like the gifts UC receives, are typically restricted. Donors require that the interest generated by the endowment be used for specific purposes. In 2009-10, only $28 million (8 percent of all endowment distributions) were unrestricted.

As the University's state appropriation continues to decline, the importance of endowment funding grows. However, it will not readily replace state support. The University's endowment would have to increase two and half times from its current value (from $8 billion to more than $20 billion) in order to cover the $500 million reduction in state funding proposed for 2011-12 alone. Restrictions on the use of endowment funds would also have to be eliminated.

University endowments have decreased in value from their high-water mark in 2007-08, as a result of the global economic downturn and its impact on stock markets.