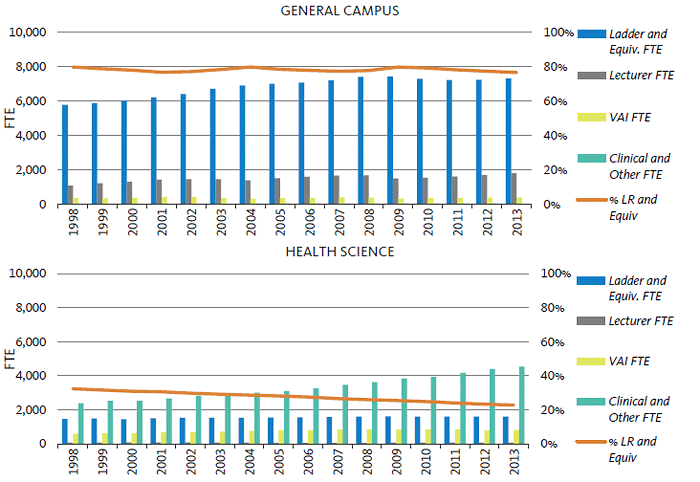 Since 2009, ladder- and equivalent-rank faculty numbers have declined from 9,037 to 8,939 in FTE as campuses reduced hiring to address budget shortfalls. Lecturer1 titles tend to be more common in general campus departments. Lecturers increased by 61 percent in FTE from 1998 to 2013 (from 15 percent to 19 percent of the total general campus faculty FTE). "Visitors, adjuncts and instructional assistants" includes other types of faculty who do not have tenure or security of employment. Student assistants, such as teaching assistants, are excluded. The "clinical and other faculty" category includes clinical faculty and professors in residence. Although there are exceptions, these faculty are generally employed at campuses with health science schools. They are mostly supported by non-state dollars, e.g., clinical revenues. This category has grown substantially in contrast to the decreases in ladder-rank and equivalent faculty.

"VAI" are "Visitors, adjuncts and instructional assistants (non-students). Source: Corporate Personnel System October snapshots and UC DSS â Earned in October, paid through November.. Health Sciences includes FTE in departments of Medicine, Dentistry, Nursing, Optometry, Pharmacy, Public Health and Veterinary Medicine. General campus includes FTE in all other departments. Lecturers are also known as "Unit 18 Lecturers" - they are mostly part-time and most are eligible to be represented by a union ("Unit 18"). UC also employs "lecturers with security of employment" and "Lecturers with Potential Security of Employment", of which there are fewer than 200 systemwide. "Lecturers with security of employment" are members of the Academic Senate and they are included in the "ladder- and equivalent-rank faculty" category throughout this report.